An analysis of the formation of the absolutist and liberal groups in Lleida at the end of the 18th century and the first half of the 19th century reveals a series of clashes between the two groups. If we also compare the socio-professional groups of their members, we can see that the absolutist ranks were made up of families of greater social influence and the peasantry, while the liberals were made up of liberal professionals, artisans and intellectuals.
On the other hand, and despite these social characteristics, 54% of the municipal posts went to the liberals, following the trend of other Catalan town councils of this chronology. This situation led to the founding of the National Militia as a neighbourhood tool (already provided for in the 1812 Constitution) to defend liberalism and its governing institutions in each locality.
The National Militia allowed a large part of the population – most of them as volunteers – to participate in political life as protagonists, especially in the key years of the liberal revolution, between 1833 and 1843. The main problem they faced was the social groups that supported them, with more than 50% of the population of Lleida, dedicated to farming, remaining outside of them.
In this socio-political panorama, Ferdinand VII at the end of 1823 decided to copy the liberal model and created a group for the defence of absolutism, the Royalist Volunteers, thus attracting other sectors of the population that for convenience or ideology were not attracted by the liberal currents.

Abstract: Table showing the proportion of national militiamen and royalist volunteers in Lleida between 1820 and 1841

Geographical atlas of Spain, which includes the General Map of the Kingdom, and the Particulars of Its Provinces, by D. Tomás Lopez, Geographer who was of the domains of S.M., of various academies and societies 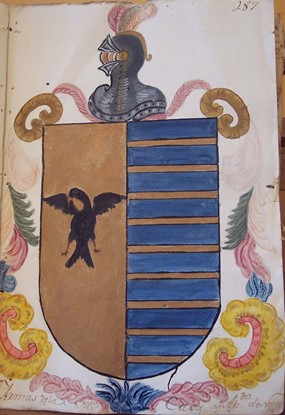 Coat of arms of the surname Negro