As royal officials, the corregidores were responsible for justice, mediation and government. They were one of the most important figures in the defence of the interests of the monarchy in the large towns. The case presented by the author is the attributions of the corregidor of Valladolid, Alonso Ramírez de Villaescusa, between 1492 and 1501. A compilation of 60 systematised documents gives evidence of his actions: the majority were executions in acts of concord or justice (28% of cases), followed by acting as mediator (25%), management of the office (18%), taxation (13%), or information and enquiries (7%). He was answerable to the Crown, and it was he who looked after the interests of the Crown in the city of Valladolid, although he also used privileged information and legal means to his advantage: he denounced Enrique de Dueñas, who was condemned for usury as a possible Jewish convert; however, the lawsuit did not prosper in favour of the corregidor and Enrique was acquitted. However, the corregidor’s aim was not to strip the accused of his property and defenestrate him socially, but to obtain part of the penalties imposed and to improve his own wealth.

Abstract: Resource that classifies the scope of action of a corregidor of Valladolid, highlighting his work as a justice, mediator and manager 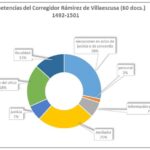