The possession of weapons in the city of Burgos during the 18th century reveals that, although they were in the minority, they were stored in those households with the greatest social preeminence. The author provides us with a resource based on the average value of firearms and bladed weapons. There is no surprise when it comes to establishing the relationship between the socio-professional categories of households and the price of the artefacts they owned: from the spinners of Burgos to the nobility, passing through farmers, artisans, merchants, public services, bureaucrats and clerics, the price is shown to be ascending in the social stratification. Special mention should be made of the military who, because of their profession, had expensive equipment far removed from ordinary weapons. If we follow this ascending process as a whole, we observe divergences in terms of the basic armament category: the highest price of court weapons predominates in the artisan, merchant and militia groups, while firearms predominate in the nobility, clerics, bureaucrats, public services and farmers, although the latter account for a very insignificant percentage of the sample. The price of the weaponry reveals its quality: poor, functional but frugal shotguns for the humblest strata compared to the luxurious weapons of the wealthy classes, either in terms of their material quality or their ornamentation. In short, the post-mortem inventories reveal shotguns, pistols, blunderbusses, swords, rapiers and sabres well differentiated in quantity, quality and effectiveness, distributed in a hierarchical manner.

Project: 6. Under a cloak of terror: violence and armed conflict in Europe., 9. Travels and travelers: economic, social and cultural connections.

Abstract: Graphic resource showing the close relationship between the quality of firearms and bladed weapons through their average value, with the socio-economic groups of Burgos society during the 18th century 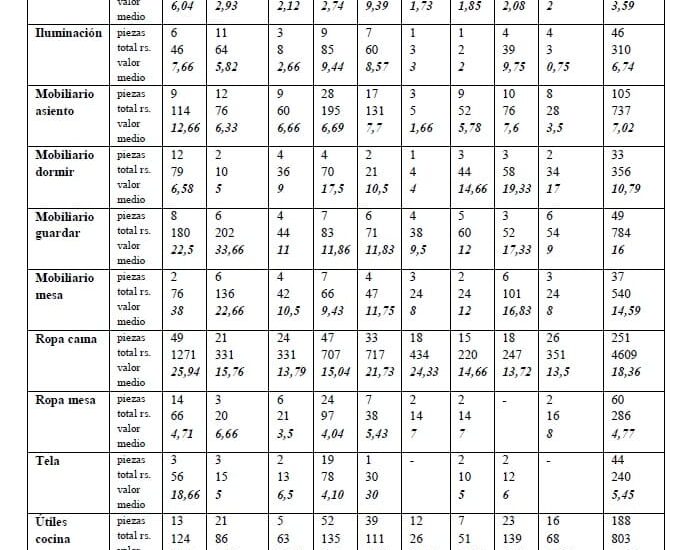