The society of the Ancien Régime was not exempt from conflict. The resource shows the evolution of collective violence in the kingdom of Navarre during the modern period. To do this, the author uses the lawsuits detected in the General Archive of Navarre and the Diocesan Archive of Pamplona to quantify them. The 800 lawsuits were distributed between 1512 and 1808, with the highest incidence occurring between 1576 and 1590. From that time onwards, the number of conflicts decreased and these were peaceful years for the inhabitants of the urban world of Navarre, which was where most unrest broke out. Community stability was broken at the time of the breakdown of the Ancien Régime: from 1771 to 1800, lawsuits, both in the civil and ecclesiastical courts, increased to the levels of the late 17th century, with the difference that incidents were more widespread in those years. According to the records, the majority of the offending protagonists were youths (48%), and the setting, with 52%, was the public street. It was common for the victims to be local authorities (43%) and other young people (20%). Of those convicted in the civil courts, the most common penalty was banishment (49%), while the ecclesiastical court opted for pecuniary penalties, i.e. the payment of a fine (40% of cases).

Project: 6. Under a cloak of terror: violence and armed conflict in Europe., 7. Persecuted by justice and powers: rebels, political dissidents and criminals in the history of Europe.

Abstract: Graph showing the evolution of lawsuits, both in civil and ecclesiastical justice, in the kingdom of Navarre during the modern period. It can be seen that the end of the Ancien Régime brought with it an increase in social conflict, mainly involving young people 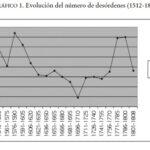 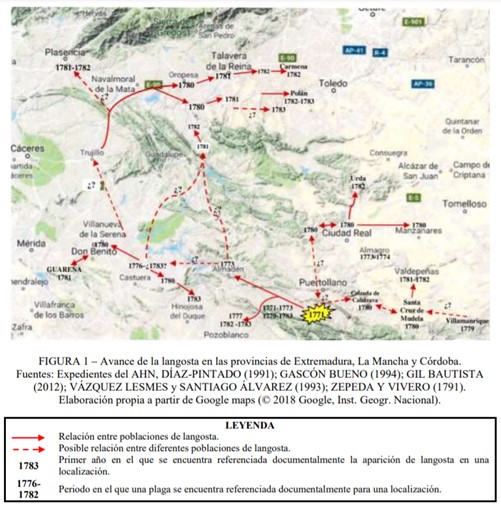 Migration of locusts in Extremadura, La Mancha and Córdoba, 1776-1783

Bull of Pius IV on the Council of Trent